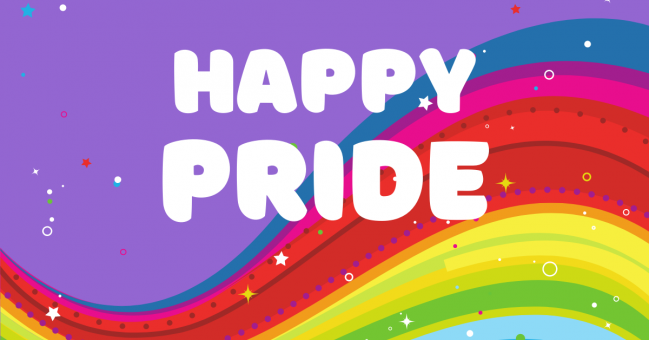 it is also a protest.

While representation is increasing, and acceptance and love is spreading, there are still many people in the LGBTQ+ community that are suffering. Yes, we celebrate this month, but we also protest for those living in countries where freedom to be yourself hasn’t been achieved, and to the lives lost getting to where we are today. Let this Pride Month be a reminder to us all that we need to consistently stand up when we hear words of hatred; we need to teach our children that love is available for everyone and that love is something we all deserve, regardless of who our partner is.
⠀⠀⠀⠀⠀⠀⠀⠀⠀
Let us continue our fight to make the world a more inclusive and accepting place. In honour of Pride Month, we are celebrating books written by LGBTQ+ community members and books with LGBTQ+ characters!

Here are a few of Tellwell’s picks:

In a world filled with magic where Gods and Goddesses walk amongst the mortals who worship them, a war is brewing-a war between the Divine that started centuries ago. Unable to fight in the Divine Realms, they’ve enlisted their followers to fight for them. And to certain mortals they’ve even bestowed their own powers.

These mortals, known as the Blessed, walk a lonely path, balancing the awesome and cruel powers of the Gods and the vulnerability of their human sides. They are immortal unless their God or Goddess sponsor abandons them or they are killed by another Blessed.

One of these Blessed, a veteran from the first war, is gathering other young Blessed to her. Her plan? Create a bond between them all so they can vanquish the God bent on bringing destruction to their world once and for all. Under her tutelage, her students will be the turning point of their world. They start their destinies struggling with their powers and their place in the world. But will they be the salvation or the destruction? Only time will tell, for they are . . .

Neilina – a Blessed who once conquered a God, she has lived a solitary existence since the first war ended. Now once again she will face a foe from her past that could be her undoing. But this time, she won’t be fighting alone.

Adeline – the only daughter of a warrior king, she is a healer and prophet. But her powers weigh heavy on her and the darkness promises sweet reprieve-will her bond to her Brethren keep her strong?

Aubrey – a young girl with a mysterious past she can’t remember. She wants to be a knight in the Holy War, but she’ll need to discover her past if she’s to help save their future.

Mathilde – the Crown Princess of the nomadic tribes, she’s got to right an ancient wrong if she wants to help her people. Her powers of the wild and animals makes her a strong card for whoever earns her loyalty in the coming war.

Niall – the bastard waif of a nobleman of a distant kingdom, he’s not who everyone thinks he is. Behind his laughing persona is the power of the cosmos. He’s got a lot to prove.

Selene – the exiled Princess, cast away by her magic-fearing father. She’s got a lot to prove and isn’t afraid of a fight. Her loyalty is unquestionable but she feeds off of her emotions. Her powers are barely in check: she could be the wildfire that burns friend and foe out.

Eibhlin – with humble beginnings, her stunning beauty enchants every man who meets her. But when a young-love romance goes wrong, bitterness rules her heart and only time will tell if she turns to her Brethren for comfort or if she’ll cast them aside.

When nine-year-old Haven Fleet disappears from her school bus stop, everything changes.

Every parent will tell you that the thought of losing their child is unfathomable. Stevie Fleet would spend her whole life searching for her lost daughter, and her four remaining children will face battles of their own.

How far would one parent go to find her lost child, and what other obstacles could meet her along the way?

Dani is a non-binary author, activist, and animal lover. They published their first novel in 2020 and have been writing since the age of ten. They are an avid activist for the LGBTQ+ community and includes this subject in many of their novels. Dani lives in Canada with their family.

“The truest, most authentic freedom in this Universe, is found in love…”

This is one of many seeds of wisdom prudently planted by Cosmo: a mysterious yet engaging and compassionate mentor to Jake Johnson, Jr., the protagonist in the novel “Coming in from the Cold”.

Jake, Jr. is a young, troubled African American man on the cusp of important life transitions when he meets and befriends Cosmo while travelling into New York City one day in early June. Cosmo takes the young man under his wings and over the course of a summer, Jake and Cosmo have a series of meetings and dialogues at significant venues in New York City. The compelling dialogues explore such topics as spirituality and religion, the constructs of race and racism, the dynamics of human sexuality and relationships, the connections between the health of planet Earth and human health, the mechanics of money and the material world, the legacy of slavery across time, and the nature of the Universe.

The first three chapters of the novel delve into the origins of Jake’s family life before his fortuitous meeting with Cosmo. At the heart of the novel is a love story. Shortly after graduating from Evergreen College in New England, young Jake travels to Japan, where he teaches English. During this transformative sojourn abroad, Jake meets and develops a close companionship with a very atypical, hip Japanese man named Hiro, who introduces Jake to love and the very best of Japanese culture.

Much against his father’s wishes, Jake is called to work in the field of education, and enrolls in Columbia University’s graduate program in teacher education upon his return from Japan. It is the period between his return from Japan and his enrollment at Columbia when Jake meets Cosmo, who provides guidance and wisdom at that critical juncture in the young man’s life. During Jake’s first semester of graduate school in New York City, however, there is a catastrophic earthquake in Japan, and all communication is cut off between Jake and his Japanese companion, Hiro. Not knowing if Hiro is dead or alive, and compelled by his deep love for him, Jake makes the momentous decision to take a dangerous trip back to Japan to find his lover, with whom he is eventually reunited. At the end of the novel, the true identity of Cosmo is revealed.

The main theme of the novel is about the redemptive powers of embracing love and wisdom in facing the vicissitudes of life during this transitional era in human history: a turbulent era on the cusp of brighter, more promising days of a more harmonious, united humanity on Earth.

Homelessness in the hardscrabble town of Belleau can be life-threatening: transients often suddenly vanish from the dingy streets without a trace. Sixteen-year-old Polly Onasis suspects the king and his guards are the culprits behind these disappearances. Once she turns eighteen, she knows she will be forced into the city streets too, away from the safety of her foster home and family . . .

One morning, Polly wakes up to discover that her hair has turned from deep brown to brilliant violet. How? And why? She must keep herself hidden from the public, for fear of being noticed by the king’s guards. But soon enough her eighteenth birthday is upon her, and she no longer has any way to hide herself. She runs into a mysterious stranger who seems to know all about Polly and the secrets which lie behind her hair. Polly’s life is turned upside down as she is carried through the wonderful and the nightmarish, the dark alleyways of Belleau and the king’s palace. Meanwhile, she must fight to protect her loved ones, and find out who she really is.

Basil’s Unkie Herb microwaves socks, plans fabulous birthday surprises and has a friend with a donkey, a monkey and a garbage truck.

This book chronicles the special relationship between Unkie Herb and Basil, and grandma’s worries about “lonely” Unkie Herb.

It ends with Unkie Herb finding love, and Basil learning, contrary to what the girls in school say, “where we live, you can marry whomever you love.”

This month we are celebrating our LGTBQ+ authors and books with LGTBQ+ themes and characters. Each book, story and shared experience paves the way towards a more inclusive future. It helps people see from a different perspective, and perhaps, increase understanding and change attitudes. Sharing a personal experience with the public isn’t easy but it is empowering. Thank you for sharing your story.

At the age of seventeen, his life changed dramatically when his father died and David took on the running of the family cinemas and drive-in theatres. Puberty and not coming to terms with being gay plagued David who had to keep his sexuality secret in his small home town.

His career includes forty years as a film exhibitor; establishing a horse stud; managing a motel; working in the hospitality industry, and a few other experiences along the way. David’s latest book, Stargazer, is an autobiography highlighting the value of family, ingenuity, bravado, old-fashioned common sense, colourful characters and unfailing good humour. From rural towns in Victoria and New South Wales, to the mountain life in Queensland, the constant has been faithful canine companions, perseverance and a joy for living.