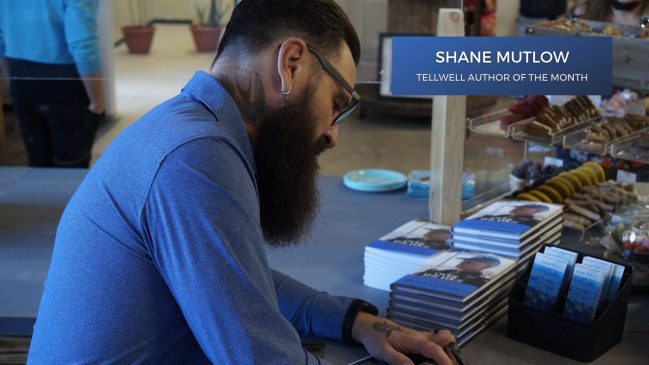 In 1994, Shane Mutlow, a corporal in the Canadian Armed Forces, deployed to Rwanda in the wake of the Rwandan Genocide, the most horrific genocide since World War II. At just 24 years old and in the span of 6 months, Shane was “labelled ‘whereabouts unknown’ twice and held against his will while on a major operation by Rwandan government officials.” Every day he went out into the jungle unsure if he would come back alive.

In his new book, One Foot Over the Edge: A Canadian Soldier’s Personal Account of The Rwandan Genocide, Shane recounts the contributions that Canadian soldiers made, to show a side of Canadian history that had yet to be told. Beyond that, he opens up about his experience of living with Post Traumatic Stress Disorder. It’s his hope that he can help others with PTSD find resources and feel less alone, and create a better understanding of what soldiers and their families go through when they return home from being deployed overseas.

Since publishing One Foot Over the Edge this past August, Shane has become an Amazon Best Seller in three different categories: #1 in Rwandan History, #2 in Military and Spies Biographies and Novels, and #2 in Military Biographies. He’s been featured by the Ottawa Citizen, and he recently hosted a successful book launch. There’s more! The screenplay of One Foot Over the Edge won Best Unproduced Script at the Toronto International Women’s Film Festival. It’s also in the running for two more international film festivals. Read on to learn more about Shane and his new book, and discover a few of the lessons he’s learned as a self-published author.

Please tell us a bit about yourself.

I am a veteran of the Canadian Armed Forces who, in 1994, was deployed to Rwanda, Africa, on a United Nations Mission to help provide humanitarian aide to the people who survived the genocide, and to bring stability back to their country. I have three children—two boys (Nicolas, Zachary), one girl (Madison)—and my beautiful wife (Justine). I currently live in Pembroke, ON.

Your story is twenty years in the making. What inspired you to write One Foot Over the Edge?

The main reason I chose to write my story: my family. They have provided me the strength and courage to take it on and I want to show them that I will never give up; I will always keep fighting.

You partnered with Katelyn Wells, a talented screenplay writer to turn your book into a movie, and the screenplay won Best Unproduced Script from the Toronto International Women’s Film Festival! Tell us about that.

I felt very proud of Katelyn’s accomplishment because she told the story exactly how I imagined it should be told. She stuck to my vision of it and even portrayed it better than I thought. The next step, I believe, is to get a producer interested in making a movie from the script and my story.

“PTSD is a wound with deep, hidden, and extremely painful scars. Fighting the pain of PTSD is a never-ending battle. This book gives the reader an insider’s view of the mental anguish suffered by those with PTSD.”

Dan and Joan, Amazon Review for One Foot Over the Edge.

Can you tell us more about Fortitude Farms? What role did they play in helping you personally?

Fortitude Farms is a facility that provides equine therapy as an option for those who suffer from mental health issues. If it were not for the farm and the horse that I have formed a bond with, Ginger, I am most certain that I would not be alive today.

A portion of sales from One Foot Over The Edge will be donated to Fortitude Farms, a facility that provides equine therapy for those who suffer with mental illness.

What advice or words of encouragement can you share for those who are dealing with Post-Traumatic Stress Disorder?

As soldiers, we believe if we are injured that we are broken and no longer effective. This is completely wrong. You are not broken, you have an injury. Although you or others cannot see it like a cast or a bandage, it is still an injury. The most important thing to know is it’s not your fault. We do a job that most people can’t, and you must remember how strong you are for doing this, and take that strength to heal yourself.

What were some of the more significant lessons you learned writing and publishing One Foot Over the Edge?

The thing I feel I took away the most from the whole experience is that writing things down, like emotions and moods, how one is feeling, or even just their own demons, is more therapeutic than one thinks. When you allow yourself to write them down, you are working on your own self-care.

What advice do you have for other authors considering self-publishing a book?

Don’t try to write things down like a professional writer or author; just put down what is in your head, then you can fine tune it later. I found that this approach keeps you true to yourself and your vision.

What have you been doing to market and promote your book?

I have created social media accounts strictly as an author, done numerous newspaper interviews and radio interviews, and most recently had my book signing.

Tell us about the other successes you’ve been having with your book since it was published earlier this year. Don’t be shy!

The thing that I find to be the most successful result in publishing my story is the positive response from fellow veterans who, after hearing or reading my story, now have the courage to seek help and aren’t afraid to talk about it.

A few days after our interview with Shane, he and his wife Justine shared more great news with Tellwell. The screenplay for One Foot Over the Edge was a finalist in the Boston Lonely Seals film festival, and it was the runner up! They’re also a finalist in the Big Apple New York Film festival.

I am going to continue spreading the word on resources available for veterans who suffer with mental health issues and make myself available to anybody who wishes to reach out and ask for information to assist them.

Just remember, as veterans, we are always there to watch over each other, so don’t be afraid to reach out.

One Foot Over the Edge is available on Amazon, Indigo, and Barnes and Noble. Remember, a portion of the proceeds go towards Fortitude Farms!

author of the monthcanadian authorscanadian veteransend stigmas around mental healthequine therapyindie authors in the newsPTSDPTSD awarenessrwandan genocideshane mutlowtellwell author of the monthtellwell authors
You may also like
Edgerton R. Nicholson shares his recipe for concocting the spine-chilling scenes in Nightmare Pie
YA author Rachael Bell-Irving uses pre-marketing to grow following, knowledge and experience for launch