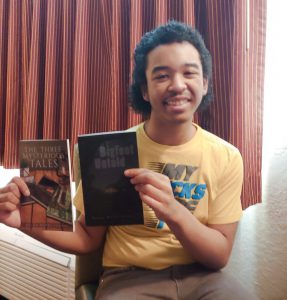 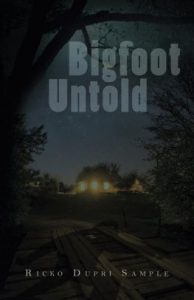 Sample’s tales are different than how Bigfoot stories are traditionally told. Usually set in the Pacific Northwest, Big Foot or Sasquatch often appears as a large, shaggy man-ape creature lurking in the forest who is spotted by an unsuspecting human. Sometimes only the creature’s very large footprints, or howls are what give him away and other tales describe face-to-face encounters.

In Sample’s book, Bigfoot is a trickster, actively wreaking havoc on his mom’s village with his mean and sometimes devastating pranks. Sample says his mom made sure the story was an accurate depiction of what she and others in her village experienced.

“I decided to publish these stories because they are unique and interesting. These are stories people in the United States haven’t heard of,” he said.

Sample’s second book, The Three Mysterious Tales, is a collection of three different stories based on legends as well as true events, that also involve encounters with an unknown supernatural figure. 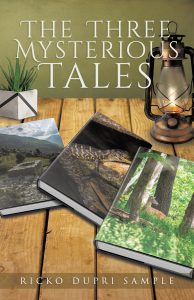 His parents have played a big role in encouraging his various talents and passions.

“They are very proud. They’ve been so supportive in helping me succeed. My parents have helped pay for the publishing of the books, and my mother specifically has helped with creating the stories in the books, since it is mostly her personal experiences and stories that she knows from growing up in Indonesia.”

For this multi-talented teenager, writing and publishing books is a fun hobby and a rewarding experience.

“I don’t think of making books as a main career. I’m doing it because I can and I find it interesting, rewarding and satisfying,” he said.

His career goals are in the film industry, to work as a professional actor, and also write screenplays. The royalties from his book are re-invested into his acting career.

So far, he’s been in a commercial and short-film but will move with his family to Los Angeles in the fall to have more opportunities to audition and act. He also plans to transfer to a four-year university program in California to finish his Fine Arts degree. Sample admits juggling academics with acting can be a hard balance.

“When I get calls for roles and auditions, I have to make sure it doesn’t interfere with my schooling. Sometimes I have to choose between one or the other.”

The 15-year-old has already accomplished an incredible amount, but he’s right – this is just the beginning.