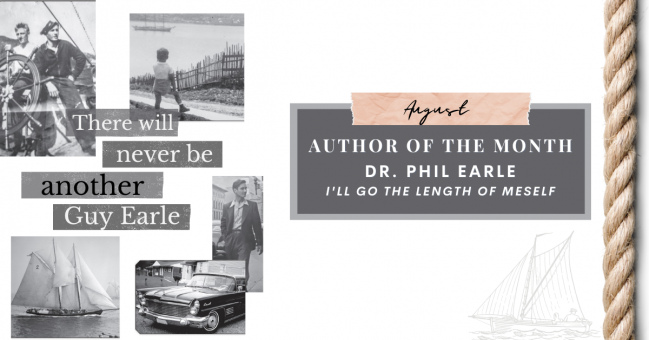 Phil Earle’s father, Guy Earle, lived an exhilarating life. With his new memoir, I’ll Go the Length of Meself, Phil hopes to showcase his legacy as a great mariner, businessman, humanitarian, and exhibitionist, along with many other attributes.

“There will never be another Guy Earle, there couldn’t be.”

This is his story, and Phil is proud to share it.

Never let failure define who you are, but instead, learn about yourself and grow from it.

– Phil Earle, author of I’ll Go the Length of Meself

From my mother and maternal grandparents, who were wonderful, I grew up believing their high standards for truth, compassion and integrity. From Captain Guy, my father, and my paternal grandparents, I learned to have respect for people and the world, and to have a drive to give the best of whatever life has given me.

What inspired you to write I’ll Go the Length of Meself?

In the beginning, I wanted to tell the story of the remarkable life of my father—this after he had been gone fifty years. And I finally, at the age of seventy, through maturity and wisdom, realized that no one had a life like him.

After finishing the book, it became obvious to me that Skipper Guy was a gifted, brilliant product of the people and culture of his era.

A second story was thus revealed in the book, the story of the great maritime people of the coast of Newfoundland. It became obvious to me that much of what I admired and expressed about my father and the culture of his people is strongly embedded in my character as well.