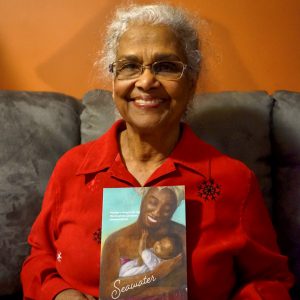 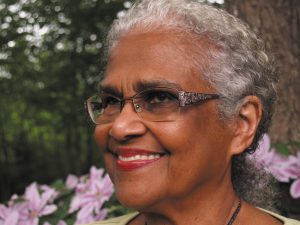 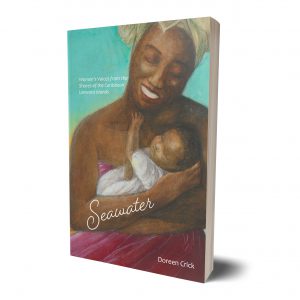 “My school history books were about European men – whether they were scoundrels or heroes,” she said.  “I wanted to share a different history about women and children.”The title, Seawater, is symbolic of the separation between slavery and freedom.

“It was on seawater that the Ghanaians came from Africa.  It was seawater that separated us.  Interaction with seawater was forbidden to slaves – ‘no boats, no fishing,'” said the author.

Crick introduces us to the three Caribbean islands separately and walks us through the new colonial rules laid down by the planters. She paints a picture of how black women might have first heard about the promise of freedom, and how Christianity spread throughout households.

The tone is educational and informative, sprinkled with folk tales and Crick’s own poetry. The book contains colourful images of the three islands as well as illustrations by Esmé Archer-Rousseland.

“I want people to know the past is not always what we wanted it to be. But what have we learned from the past? Do we carry the burdens or the treasures of the past? Let’s find the treasures.”

Her second book, The Beautiful Caribbean Rainbow Islands, is on a much different topic. It is an illustrated children’s book of three folk tales about how moon pixies made the Caribbean beautiful. 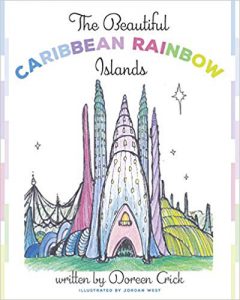 The now 85-year-old author has been sharing the treasures in her books with captivated audiences from several elementary schools in Halifax as part of Black History Month.

“Black history in Nova Scotia is written by black people post-slavery. Whereas in my book, I have personal anecdotes, not just about the pain and torture, but about survival.”

Crick has been busy promoting her book in other ways. She had a full house at her book launch at the local library and received many positive phone calls and emails following the event. She’s been selling her books after Sunday church as well. 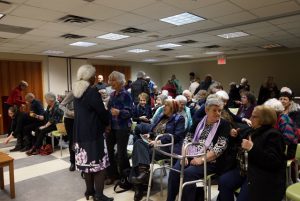 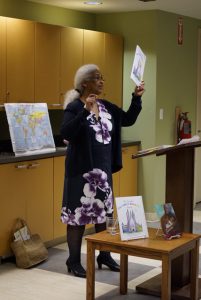 “I was surprised when I got phone calls telling me that there was so much that the callers did not know before. A few callers said that they had read the book [Seawater] twice and had passed it on to friends.”

As for the book’s original intended audience, Crick’s children and grandchildren, they’ve learned there is more to the Caribbean than just sunshine and beaches. Her eldest son in particular, who is a librarian, has been delving deep into the islands’ history.

Adding to the history books, and her own legacy, at 85, Doreen Crick is proving no one is ever too old to put their stories to paper. 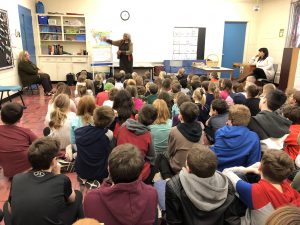